Looking back on 2021 it is fair to say it was a year of both uncertainty and anticipation.  Uncertainty with a global pandemic at hand but also anticipation for return to a degree of normalcy.  However, one must resist the common practice of taking what has happened in the past and extrapolating a conclusion on the future – e.g. equity markets have had a few strong years so another positive year is destined (recency bias) or conversely, we’ve had a few strong years so a negative one is a certainty (contrarian bias).  It is important to look at investing as a marathon, not a sprint, and snapshots of any one year are nothing more than brief segments in time to be reviewed as part of a long term investing process.    In this newsletter, we will focus on revisiting some of the biggest market and economic topics of 2021 below and what might lie ahead for 2022.

Coming out of a volatile 2020, investors sought signals as to which way the global economy was headed.  A recovery ensued but so did a very strong bout of inflation.  Global Gross Domestic Product (GDP) grew, completing the transition from recovery to expansion and eventually surpassing its pre-pandemic peak in many economic indicators.  However, inflation built up to very high levels, reaching a peak of 7% year-over-year  ending  December.  This inflation likely has been the result of labor shortages and supply chain issues as price increases occurred rapidly in areas such as food and energy and spilled over into other sectors as well.

Throughout the year, the stock markets continued a relatively steady rise, with large cap stocks in the US ending 2021 near a record high. The S&P 500 Index[2] generated returns of 28.71% with strong corporate earnings and increased consumer demand providing a positive backdrop. In the third quarter, US corporations pulled in record profits—both in dollar terms and as a share of GDP (11%)[3]. That came as consumer spending generally trended higher throughout the year, rebounding from pandemic lows.

Given our global low interest rate environment, many believe stocks are the best way to achieve successful investment returns.  2021 was definitely a year to support that view with the S&P 500 having notched 75 closing records on a total-return basis.

Likewise, global markets continued to rise alongside those in the US, despite some setbacks, as Exhibit 1 (next page) shows. Markets that started the year strong were up and down in the year’s second half but still near all-time highs. Global equities, as measured by the MSCI All Country World Index[4], increased 18.54%. Developed international stocks, as represented by the MSCI World ex USA Index, rose 12.62%, notably stronger than emerging markets, which saw the MSCI Emerging Markets Index fall –2.54%.

Value stocks (those with lower relative prices) began the year strong as the economy reopened and interest rates were rising, but growth stocks rallied later in the year. As the economy cooled modestly in the second half, investors likely felt safer with growth stocks in a weaker economy.  Note that over the long term, value stocks have generally outperformed growth stocks—by about 2.5% based on average annualized returns since 1926 in the US.

Fixed income markets experienced more tepid returns than the equity markets, with the Bloomberg Global Aggregate Bond Index returning –1.39%.  After widening in 2020, credit spreads ended 2021 at levels narrower than pre-pandemic levels. For the year, corporate bonds generally outperformed their government counterparts.  The dispersion between the two asset classes was much less pronounced than during the previous year, with global corporate bonds outperforming global Treasury and government-related bonds by 0.82%.[5]  US Treasuries returned a –2.32%, while TIPS (government bonds linked to the Consumer Price Index) returned a robust 5.96%.[6] 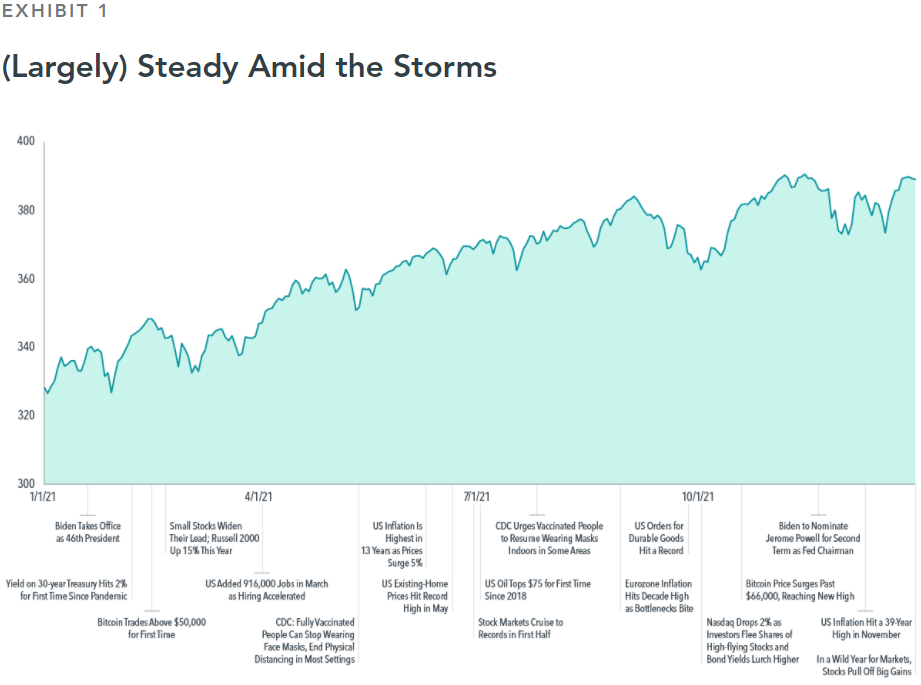 A Focus on Inflation and Debt

Like in equities, when it comes to fixed income (bonds) there has been a significant change from the inflationary period of the 1970’s and early 1980’s and today.  As many remember, interest rates in the early 1980’s reached historic heights, peaking at about 15.8% for the 10yr Treasury bond, in 1981.  Inflation as of December 2021 is running close to the same, 5-7%, yet the 10yr Treasury bond is only yielding about 1.8% at the time of this writing.  Consequently, the impact to bonds by inflation has lessened dramatically as well.  In addition, the Bridge Advisory portfolios fixed income allocation is overweighted to TIPS which, as mentioned above, may provide positive returns in a rising inflationary environment. Yields appear to be capped, even with inflation at decades high rates.  As the 10yr Treasury bond yield chart in Exhibit 2 shows, we have continued a 40yr trend of consistently lower lows and lower highs in yields.  For now, unless there is a change to the current way the financial system is wired, rates will likely continue this long term trend lower despite the recent spike in inflation.

In addition, during 2021 we witnessed a continued acceleration of increasing debt levels.  Total Federal debt to GDP held by the public reached all-time highs, now over 125% and on a pace to exceed 130% this year, see Exhibit 3 .  It is unlikely that the pace of growth of debt will slow, which may put pressure on economic activity and subsequently bond yields.

As Exhibit 4  shows, real yields (government bond yields minus inflation) have fallen to negative territory.  A number of academic studies show that when government debt exceeds GDP by more than 90%, a significant slowdown in economic activity will follow7. It’s not clear if and how this will impact U.S. GDP growth given our status in the global economy.  In the short term, it appears this slowdown in economic activity began showing up over the last half of 2021 and has also recently been shown in global economies as well. 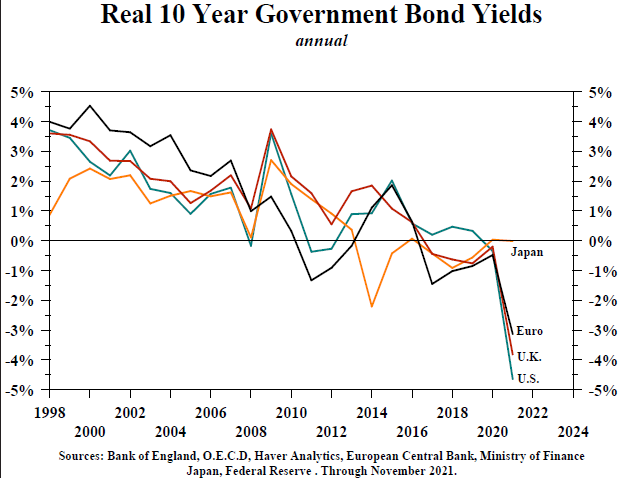 7 Bridge Advisory, LLC. has written consent from HIMCo for usage of the newsletter Charts. https://hoisington.com/

So far it has been a bumpy ride for almost all asset classes to begin 2022. For example, the S&P 500 had a swing of 5% between being up and down in the same day. Generally, stock indexes have fallen from -5% to -20%, indicating a bear market for those stock indexes hardest hit. Simultaneously, yields have spiked causing bond prices to drop, though modestly compared to stocks. Gold, cryptos, and most commodities have sold off as well.

We see one major benefit and a few major headwinds for equities going forward. As mentioned, global interest rates are extremely low and likely to remain there for now, giving equities a preferred choice for many investors. However, short term US interest rates may not stay as low as the Federal Reserve Board has announced four rate hikes beginning in March. In addition, recent economic data over the past month or two has shown a slowdown in GDP forecasts and consumer sentiment. Also, despite the recent decline in equity prices, valuations remain at high historical valuations, creating risks to the downside for conservative investors with short term time horizons or ongoing withdrawal needs.

Time will tell but typically after a few months of initial selloff, high grade bonds will likely turn around and trend higher as yields stabilize or fall as expected with the slowdown in economic activity for reasons mentioned above. If bond yields break upwards out of their 40yr trend, then it is likely that secular inflation has taken hold and rebalancing of portfolios will take place to take advantage of this new trend. Our commitment to long-term investing success is unwavering and we believe strongly in prudent diversification and a disciplined investment process.

Bridge Advisory, LLC is an investment adviser registered with the U.S. Securities and Exchange Commission.

Content intended for educational/informational purposes only. Not investment advice, or a recommendation of any security, strategy, or account type.

Past performance is not a guarantee of future results. Indices are not available for direct investment. Index performance does not reflect the expenses associated with the management of an actual portfolio.

Information herein has been obtained from sources believed to be reliable, but Bridge Advisory, LLC. does not warrant its completeness or accuracy; opinions and estimates constitute our judgment as of this date and are subject to change without notice. This newsletter expresses the views of the authors as of the date indicated and such views are subject to change without notice.

1 Adapted but modified from “Market Review 2021: A Recovery Amid Challenges” from Dimensional Fund Advisors LP.

[3] Data is based on after-tax corporate profits from current production and is according to estimates from the US Bureau of Economic Analysis.

[4] MSCI data © MSCI 2022, all rights reserved. Indices are not available for direct investment.