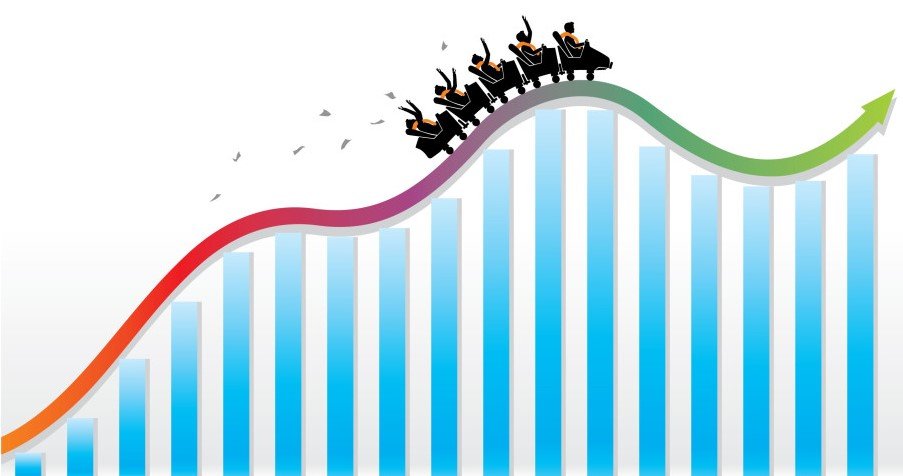 Time is such a funny thing – three months can feel so short yet at the same time be packed with what seems like a year full of events. You may have already forgot that the Olympics just recently took place over the summer, it was not too long ago that the general consensus on inflation was that it would come and go quickly (the jury is still deliberating that one…), and the Delta variant was just recently added to the global lexicon. We should all learn from the lessons reflection can provide us in general but certainly when it comes to investing – so much can happen in a short period, yet it is still just a blip on your journey. This conclusion can be trite but it continues to pass the test of time and prove its value. It can certainly be applied to the most recent period. The Delta variant threw a wrench in the global recovery, interest rates fluctuated the most in recent memory and there was a moderate market decline in September yet overall the period was largely a wash for most markets. That being said, we are humans and with markets reaching all-times highs on a regular basis, headlines of inflation heating up and interest rates on bonds at very low levels, it’s only natural to feel a bit anxious. We’d like to address that feeling head on.

Enjoy the View and the Ride [1]

Investors are often conflicted about market prices. They are pleased to see their existing equity holdings gain in value but apprehensive that higher prices somehow foreshadow a dramatic downturn in the future, or if prices fall, they are often reluctant to make any changes.

Financial journalists periodically stoke investors’ anxiety by suggesting the laws of physics apply to financial markets—that what goes up must come down. “Stocks Head Back to Earth,” read a headline in the Wall Street Journal in 2012.2 “Weird Science: Wall Street Repeals Law of Gravity,” Barron’s put it in 2017.3 And a Los Angeles Times reporter had a similar take last year, noting that low interest rates have “helped stock and bond markets defy gravity.”4

Those who find such observations alarming will likely shy away from purchasing assets in such environments.  But prices are not heavy objects kept aloft through strenuous effort. They are perpetual claim tickets on companies’ earnings and dividends and contractual loan obligations. Thousands of business managers go to work every day seeking projects that appear to offer profitable returns on capital while providing goods and services people desire. Although some new ideas and the firms behind them end in failure, history offers abundant evidence that investors around the world can be rewarded for the capital they provide over the long-term.

Whether at a new high or a new low, today’s share price reflects investors’ collective judgment of what tomorrow’s earnings and dividends are likely to be—and those of all the tomorrows to come. And every day, stocks and bonds must be priced to deliver a positive expected return for the buyer. Otherwise, no trade would take place. It’s difficult to imagine a scenario where investors freely invest in stocks with the expectation of losing money.

Market Update – A Brief Around the World Tour of Markets

If you just happened to look at the numbers at quarter end (which is definitely a better practice for your mental health than looking daily) it’d be easy to think that not much happened over the last three months. As previously mentioned, the quarter overall was basically flat for most markets. For some, the more recent memory of a rocky and negative month of September is likely to be more fresh in your mind. Eitherway you view it, the September pullback and a flat quarter overall was a much needed breather after many months of persistently calm and upward trending action. At the end of the day and however unsettling, it’s healthy for markets to move in different directions. Luckily, as of this writing the breather appears to be short-lived. 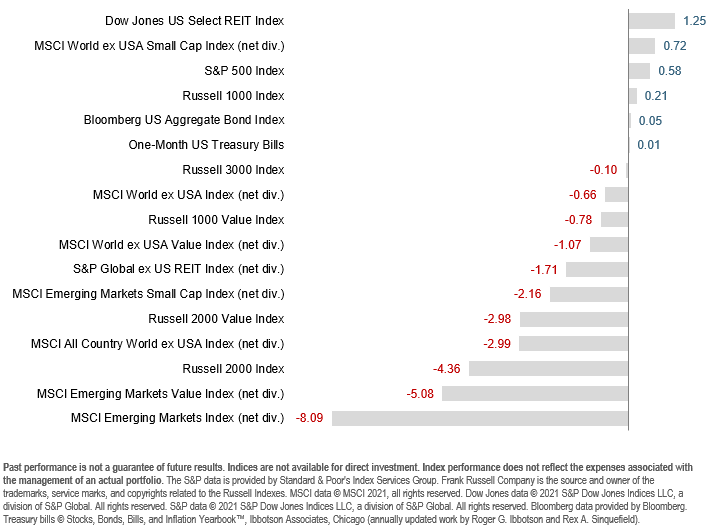 Stocks were essentially flat with the exception of Emerging Markets, where the prospect of higher interest rates in the developed world (primarily in the US) combined with the Chinese government’s crackdown on technology companies and over-indebtedness really spoked investors. The Chinese market was down just under 18%, which is nearly bear market territory, while Emerging Markets overall experienced a decline of around 8%. In the US and other developed world markets, there was seemingly a collective pause and recalibration as central bankers fine-tuned their policy tools and market participants reassessed their earnings expectations after a very strong period of growth over the last few quarters. 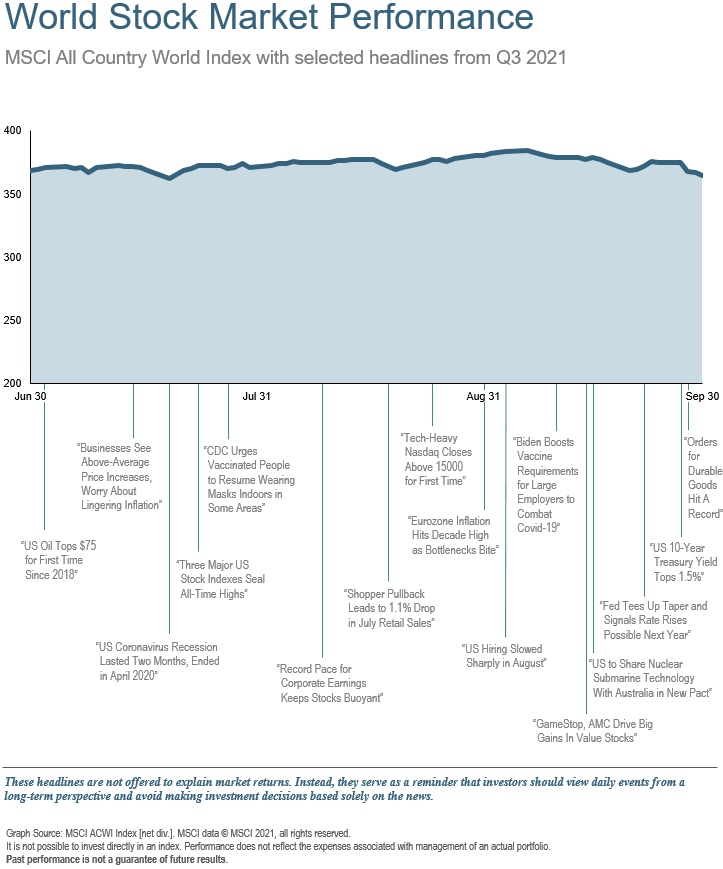 As with stocks, the broad based bond market was essentially flat. Rates in the bond market were generally unchanged during the third quarter, albeit certain maturity levels did jump slightly – the closely watched 10-year US Treasury note being the greatest example with a 0.08% increase. Early in the period, rates did drop as the economic recovery seemed to be slowing. That was soon countered by heightened inflation expectations and the increased likelihood that the Fed along with other central banks would be withdrawing monetary support from the system later this year. Bonds with more risky characteristics (i.e. High Yield/below investment grade) did produce positive returns driven by demand for higher rates of interest.

The global economy continued to grow but showed tangible signs of a slowing pace. However, the US Fed appears confident enough to stick with its plan to reduce monetary support later this. Needless to say that nothing is set in stone but the Fed certainly reaffirmed its plans to unwind stimulus multiple times recently. This unwinding will take the form of the Fed stopping certain assets purchases first followed by an increase in the fed funds rate (a key short term interest in the economy). However, the latter is still not likely to happen until 2023.

The unemployment picture did brighten but is still below pre-pandemic levels. The Delta variant of Covid spread throughout many regions and though it didn’t put the brakes on the recovery completely it certainly created meaningful headwinds.

As the pandemic continues to fade in the rearview mirror, its impact is likely to reverberate through the global economy for some time. There are tangible examples of this now – inflation, spikes in cases due to mutations in the virus and supply chain headaches as the holiday season fast approaches. All of these effects are likely to continue to be felt for some time. The Fed and other central bankers around the world face a difficult task – withdrawing stimulus as the economy recovers and inflation ticks up while not spooking investors and derailing the recovery.  Time will tell if they can do it. 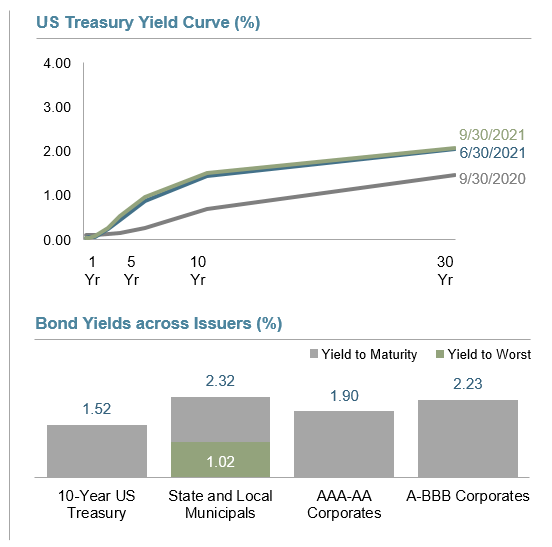